What state in 2022 has the most payday loans? 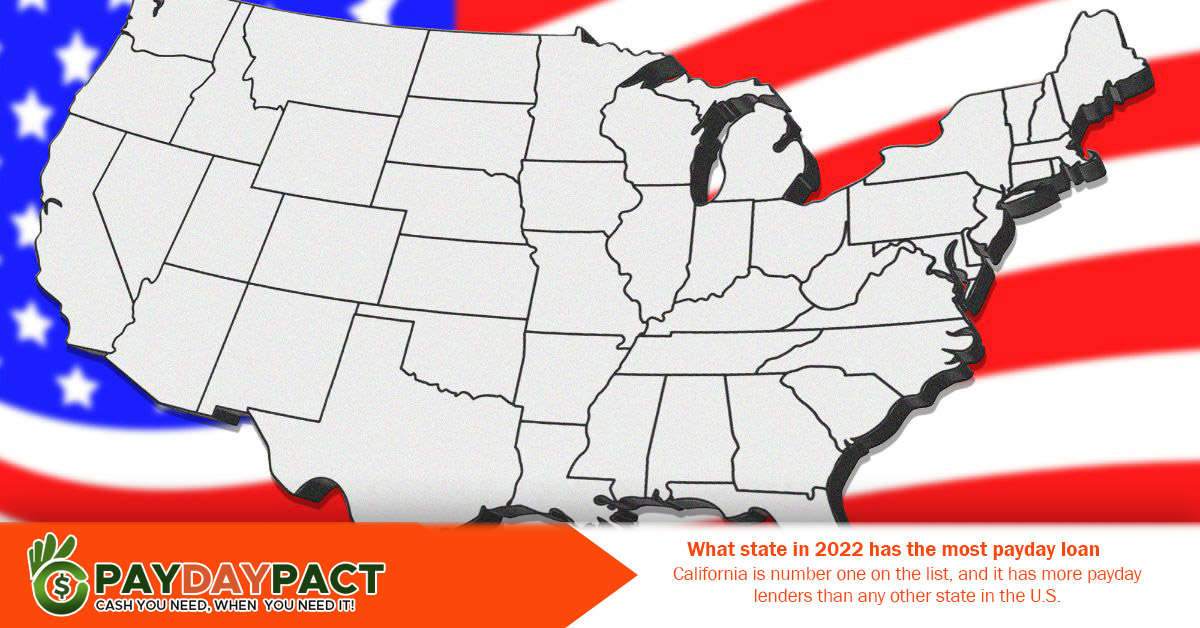 California is at the top of the rankings and has more payday lenders accessible than any other state in the United States. The state’s total number of payday lenders is a staggering 2,451. However, this is not to argue that other states do not have something to offer. There is no question that you will be able to locate a payday lender in your vicinity of you, regardless of whether you are in Sacramento, Los Angeles, or San Diego.

Texas comes in a close second to California regarding the number of payday lenders available across the state, with 1,675 total locations. The following two states on the list are Tennessee (1,344) and Mississippi (1,100). With only five payday loan firms, Rhode Island has the lowest number of states in the country.

Nevertheless, if you look at the figures per person, New Mexico comes out on top since the state has nearly as many payday loan businesses as McDonald’s restaurants.

We can examine how the typical borrower acts by looking at the loans provided in different states. The average American borrower takes out eight loans each year and pays $520 in interest payments. Even in the states with the most stringent rules, 2.9% of adult residents have used the services of a payday loan in the most recent five years.

Payday Lenders on a Population Basis

The term “per capita” is used to describe the ratio of the number of payday lenders in a state to the total population of that state; more specifically, it represents the number of lenders accessible for every 100,000 residents of a state.

New Mexico has the nation’s greatest concentration of payday lending businesses relative to its population size. There are 41.78 payday loan businesses for every 100,000 residents in New Mexico. The next closest state is South Dakota, with a score of 40.01, followed by Mississippi, with 38.67.

In which states is it legal to get a payday loan?

Payday loans are designed to assist those currently experiencing temporary financial difficulties; nevertheless, they also come with a few drawbacks. Some governments encourage their residents to avoid taking out needless loans by charging them high-interest rates and imposing tight stipulations on the loans. Because of this, their use of them is prohibited in several states.

Thirty-seven states, including California, Illinois, Florida, Louisiana, Ohio, Tennessee, and Texas, have enacted legislation that makes getting one of these loans possible.

Meanwhile, thirteen states do not permit loans to be granted inside their borders. Among these states are New York, Arizona, and Virginia.

Several states not only permit the issuance of loans but also regulate them. For example, Colorado, Montana, New Hampshire, and South Dakota conditions have all established maximums for the applicable interest rates.

How Can I Determine If a Lender Has Their License?

Before getting a loan from a payday lender, you should always verify that the company has the appropriate licensing. This safeguards you!

Lenders of payday loans, including those operating online, should have a license granted by the state where they operate. These licenses must be displayed at the storefront or company website. You need to inquire about seeing the permit if you cannot locate it on your own. If the lending company is authorized, they should be able to provide their license, which is often given by the state.

You may check the license with the agency that handles financial rules in your state or with the state attorney if you are still uncertain or have reservations about it.

Suppose you decide to apply for a loan with PaydayPact. In that case, you can do so with the peace of mind that all of our lenders are reputable and subject to oversight since they are required to operate in line with state legislation and that of the Consumer Financial Protection Bureau.

Do Interest Rates Differ From State To State?

There is a significant amount of difference from one area to the next. This is because certain jurisdictions, such as Montana, have laws that limit the amount of interest that may be charged on loans. Borrowers cannot be charged more than 75%. Meanwhile, the applicable interest rate might be higher in Texas.

Which states have the highest interest rates offered to their residents?

The states of Nevada, Ohio, Virginia, Utah, Texas, and Idaho all have interest rates for payday loans that are more than 600% per loan, making them the states with the highest interest rates in the United States.

With a national average interest rate of 667% for payday loans, Ohio has the highest rates for these types of loans in the whole United States.

On the other side, the US states of New Mexico and Oregon have average interest rates far lower than those of the other states in the US, coming in at 175% and 154%, respectively.

Some states and regions in the United States have some of the lowest interest rates. These include the states of Maine, Colorado, and Minnesota.

What is a payday loan?

A payday loan is a short-term loan generally associated with very high-interest rates and is intended to be returned on the borrower’s next “payday.” In reality, they are a kind of predatory lending in which annual percentage rates (APRs) may reach up to 600%, compelling borrowers to pay more in interest than the principal amount of the loan they took out. This forces many people into a cycle of debt in which they are compelled to take out a new loan to pay for the original loan they took out, or they roll over the loan, which causes the amount of money they owe to balloon to an unmanageable level. Payday loans are available to borrowers at local stores or online. To be eligible, all you need is a bank account, a valid form of identification, and confirmation that you have income.

The payday loan industry is one of the most deplorable and financially ruinous types of predatory lending. The typical cost for a payday loan is $520, on top of the original loan amount of $375. This leaves debtors in a mountain of debt before they are even aware of what has occurred. Be careful of the regulations governing payday loans in your state, and always look into other available choices if at all feasible.

Are payday loans allowed in Ohio?

Payday loans are permitted in Ohio; however, the maximum loan amount is $1000, the annual percentage rate (APR) cannot exceed 28%, and borrowers can only have one active loan at any time.

Does the state of Colorado regulate payday loans in any way?

Payday loans are permitted in Colorado; however, the maximum loan amount is set at $500, and the annual percentage rate (APR) is capped at 36%. Other consumer-friendly policies are also in place.

What provisions does the state of Illinois provide for payday loans?

The maximum amount that may be borrowed via a payday loan in Illinois is $1000 (or 25% of the borrower’s gross monthly income), and the interest rate cannot exceed 36%. The repayment schedule for the loan ranges from 13 to 120 days.

What exactly is a usury law?

Usury legislation limits the interest rates that lenders may charge on loans, preventing them from being unduly high.